Historical industrial building at the TCAAP

The former Twin Cities Army Ammunition Plant (TCAAP) is bound by Interstate 35W on the west, Highway 96 on the south, Lexington Ave on the east, and County Road I on the north and located approximately eight miles to the north of Minneapolis, Minnesota. It contains specialized infrastructure that supported ammunition manufacturing and testing.

TCAAP was a product of the Government-Owned, Contractor-Operated (GOCO) war materials production program established by the War Department during World War II. The Minneapolis – Saint Paul area emerged as a potential GOCO candidate primarily on the basis of labor supply. TCAAP was one of six GOCO plants built to produce small arms ammunition during World War II and was operated by the Federal Cartridge Corporation under contract to the War Department.

Construction on TCAAP began in August 1941 with the objective of producing .30, .50, and .45 caliber ammunition. Production of small arms ammunition began in March 1942, and the plant remained in production for 42 months. Between 1942 and 1945, TCAAP produced all five main small arms types: ball, armor piercing, tracer, incendiary, and blanks. In 1944, the plant opened an important small arms ammunition reclamation center. The design of the .30 and .50 caliber cartridge-disassembly machines by TCAAP personnel in the late 1940s represented a significant technological advance in small arms salvage technology. Development in ammunition salvage begun during World War II continued at the facility during the Cold War period. The work force reached its peak in July 1943, when employment totaled about 26,000 people, more than half of whom were women.

After Victory over Japan Day in September 1945, the Twin Cities Ordnance Plant was placed in reserve status and mothballed. Renamed the Twin Cities Arsenal, it was operated by the U.S. Army from 1946 to 1950, when the installation was brought back into production to manufacture small arms and artillery ammunition for the Korean War. The Arsenal remained in service until 1957, when it was again closed. In 1965, during the Vietnam War, the plant was re-opened for the manufacture of new types of small arms ammunition.

Other TCAAP uses included manufacture of munitions-related components, handling/storage of materials for other government agencies, and various non-military activities. Production levels at the plant varied over time and ceased in 2005.

During operations of the plant, TCAAP generated industrial wastes that were disposed of using the accepted practices of the time, which included on-site dumping, burial, and open-burning. Between 1978 and 1982, groundwater impacts in the regional aquifer were discovered beyond the former TCAAP boundary. Chemicals of concern at the former TCAAP included chlorinated solvents, explosives, volatile organic compounds (VOCs), polychlorinated biphenyls (PCBs), poly-aromatic hydrocarbons, lead, and ammunition-related heavy metals. Cleanup activities at the former TCAAP began after the discovery of groundwater impacts and have continued to the present day. A three-party Federal Facility Agreement (FFA) between the Army, the Minnesota Pollution Control Agency (MPCA), and the U.S. Environmental Protection Agency (EPA) was signed in December 1987, the first such agreement nationwide. The Army, EPA, and MPCA have worked jointly to determine the chemicals of concern involved, the extent of affected soil and groundwater, and the cleanup that is required.

Based on the information gathered between 1978 and 1982, the former TCAAP was placed on the National Priority List (NPL) in September 1983 and was designated as the New Brighton/Arden Hills (NB/AH) Superfund Site. The Superfund site consists of the former TCAAP and areas outside of the plant boundaries that are impacted by historical operations at the plant. The former TCAAP site has been divided into three operable units (OUs) based on the nature and extent of the affected groundwater plume on- and off-site. The plume is approximately two miles wide and six miles long.

The plant was on standby status from 1976 through 2002, when the Army declared the property excess, making the remaining acres available for reuse. In October 2002, responsibility for environmental cleanup operations and property conveyance was transferred from the Army Materiel Command to the ACSIM BRAC Division.

So far, 2,141 of 2,306 total acres has been transferred.  Ramsey County and the state of Kansas received 115.4 acres and 36.9 acres through public benefit conveyance.  The National Guard Bureau was transferred 1,521 acres.  In October 1999, Public Law 106-65, Section 2840 authorized the Secretary of the Army to convey two parcels from the Twin Cities Army Ammunition Plant to support local redevelopment. Ramsey County received 39.8 acres and the City of Arden Hills received 6.9 acres through this special legislation. A negotiated sale transferred 397 acres to Ramsey County and 23.5 acres for commercial use.

Currently, there are blanket land use controls (LUCs) issued for soil and groundwater at OU2. A blanket LUC is one considered to apply to a significant portion of OU2. The U.S. Army and Ramsey County are electing to implement blanket LUCs as a practical matter for administration of the LUCs. Following the delisting of soils for OU2, the current blanket LUC for soil limits the property to industrial use, which restricts typical, day-to-day use to activities by adults that involve being on-site 250 days or less per year, and do not involve contact with bare soil on a routine basis. The exceptions to this blanket soil LUC are the portions of OU2 released to Ramsey County, Site F, and the “watchable wildlife area,” which allow unrestricted use and no soil LUCs are required.

Within the former TCAAP property boundary, 20 sites are actively undergoing treatment remedies, and eight sites have been cleaned up:

Additionally, Round Lake, known as TCAAP-31, is also still an active remedial site. The Supplemental Remedial Investigation/Feasibility Study (SRI/FS) is currently being prepared by the Army . 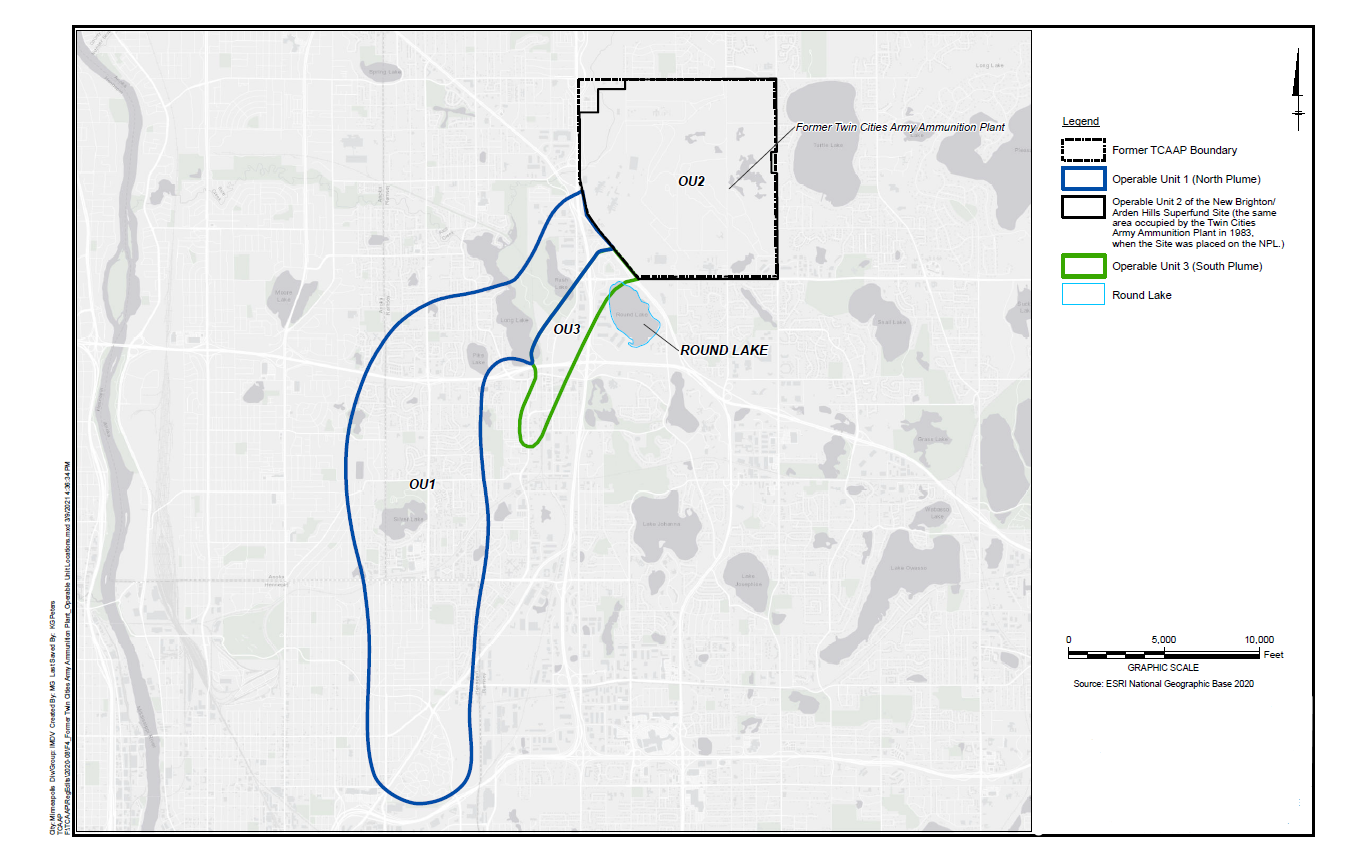 The Installation Restoration Program (IRP) activities at the former TCAAP operate principally under the Comprehensive Environmental Response, Compensation, and Liability Act, as amended by the Superfund Amendments and Reauthorization Act, and National Oil and Hazardous Substances Contingency Plan requirements, under the direction of the United States Army Environmental Command.

In December 1987, a three-party FFA was implemented between the Army, the EPA, and the MPCA. This interagency agreement is the regulatory driver for restoration activities at the former TCAAP. A two-party Defense and State Memorandum of Agreement/Cooperative Agreement between the Army and the MPCA became effective in June 1991.
The Army, as the lead agency, is conducting the investigation and cleanup of the facility under the oversight of the EPA and MPCA. In accordance with the FFA, the Army initiated many interim response activities under the Department of Defense Installation Restoration Program.

Records of Decision (RODs) have been signed for the three OUs, as follows:

Reasonably anticipated future uses of the former TCAAP include government buildings, multi-use facilities, and nature preserves. Human health and the environment are currently protected at all OUs through various remedies. Remedies to mitigate potential risks associated with private wells at all OUs include an alternate water supply, a well abandonment program, and drilling advisories. Remedies at OU2 soil sites are currently functioning, and data indicate progress towards achieving the Remedial Action Objectives.

Currently, the primary chemicals of concern (COCs) for the NB/AH Superfund Site include 1,4-Dioxane, dichloroethane (DCA), dichloroethene (DCE), trichloroethane (TCA) , and trichloroethene (TCE). Action criteria levels for the COCs in groundwater and surface water are listed in the FFA and are based on U.S. EPA standards. The screening level criteria used for the COC 1,4-dioxane is the health risk limit established by the Minnesota Department of Health.

Many actions have been performed to clean up affected soil and groundwater at the NB/AH Superfund Site, including source removal, groundwater treatment, monitored natural attenuation, capping, soil treatment with an in-situ volatilization system, and soil incineration. To date, more than 94,000 cubic yards of affected soil have been treated to meet Army industrial use standards. More than 200,000 pounds of VOCs have been removed from deep soils, and the Army has successfully completed extracting VOCs from soils using soil vapor extraction systems. Approximately 1,500 cubic yards of PCB-impacted soil have been incinerated.